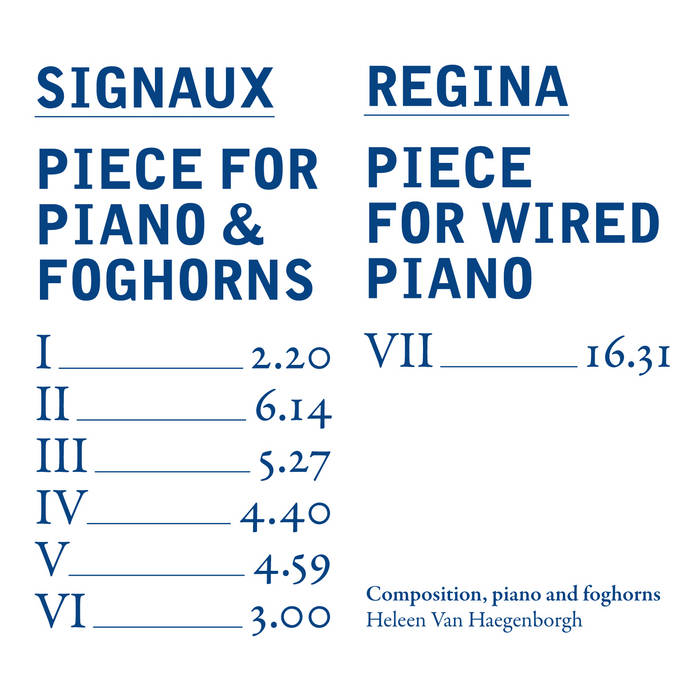 ON DISTANCE AND DROWNING

The sound of a foghorn is sculpted by distance. it takes its archetypical shape only after having travelled over several hundred meters. By moving through undulating air molecules and distorting sheets of mist, and traversing the entropy of the billowing sea's surface, it sheds volume, loses shrillness and acquires its warm, resonant and mournful sonority. However, when heard close-by, with a volume approaching 120 dB, its sound is literally deafening (110 dB is the average human pain threshold for sound; 150 dB will rupture your ear-drum).
The foghorn's emotionally provocative sound is nothing more than an in- cidental by-product of its function: to communicate with other ships over great distances. its plaintive and sorrowful connotations may well derive from this nautical function: the sound as a marker between life and death. The foghorn's wail seems to carry the collective memory of (mostly) men at sea – their longing, worries and dread – and the memory of the women on land, waiting for their husbands' return.
in her six-part composition, signaux pianist-composer Heleen Van Haegenborgh turned the foghorn into a musical instrument, providing a counter-voice for her (inside) piano.
Through Youtube, Van Haegenborgh discovered and made contact with raoul de La roche aymon, a collector of foghorns in Burgundy, France. From his collection of more than three hundred foghorns, she chose a set of 23 tones from which she formed a chromatic series of two octaves. De La roche aymon then developed a keyboard from which this unusual set of horns could be controlled. The combination of keyboard and horns produced an entirely new instrument, comparable in some degree to the pipe organ – albeit one that can be heard, and only listened to from a distance of miles. Moreover, their is no such thing as a volume control). The key is pressed and compressed air is pushed into the corresponding horn: it is a binary action – the horn blows or it does not – there is no intermediary position. sonic colouring can only be achieved by allowing the sound to interact with the surrounding open space, at sea or in a landscape. By contrast, Van Haegenborgh exploits the piano's full range of sonic possibilities. she combines regular playing with a range of extended techniques – most notably, bowing the strings of the piano with fishing line, creating delicate, quiet and sometimes even hornlike sounds. The main challenge of composing a non-amplified duet for foghorn and piano is, perhaps obviously, one of balance.
signaux was first performed live in a remote corner of the ghent harbour. The audience was seated close to the piano inside an empty storehouse.
The horns were positioned in the open air, at a distance of about 200 meters. The only way to bring together the sounds of the piano and the horn together effectively was to separate them by a great distance. This spatial separation of the two sound sources functioned as a natural equalizer – causing the delicate and quiet sounds of the bowed strings inside the piano to be almost indistinguishable from the horns resounding in the open air.
another distance that is both marked and bridged in signaux is that be- tween the contemporary and the past. Van Haegenborgh has reworked raw musical material from the hymn, 'They That go Down to the sea in ships' (1685), composed by Henry Purcell. The words are those of psalm 107, evok- ing the smallness of men faced with the vastness of the sea, in which they can see their Lord at work, both raising and calming storms. This historical dialogue with past times is not directly signalled; rather it is encoded in the composition, both literally and metaphorically. at both the start and the end of the composition one hears the pulsing translation of the words of the psalm into Morse code. On a more abstract level, the past is engraved in the now in the guise of a heavily deconstructed rendering of Purcell's thick harmonies and melodic lines, fading into sparse fragments of sounds – dis- torted echoes from the past, changing shape and dissolving into new sounds as time progresses.
in regina, establishing distance serves to create, once again, the ideal conditions for better whearing the voices of the past. expanding her use of string bowing even further in regina, Van Haegenborgh explores a wide array of sonorous textures. The bowed strings at first sound ethereal and whispering, not unlike the eerie sound of glass organs, only to build up towards a thundering mass of dark, groaning overtones.
The duet - or duel – in regina is that between 'outside' and 'inside piano', between the outward keyboard and the piano's entrails. in regina, Van Haegenborgh sets up a dialogue at an even greater historical distance, with fragments from Jacob Obrecht's salve regina (late 15th century), and the motet Laboravi clamans by Jean-Philippe rameau, which can be found as a musical example in his traité de l'Harmonie réduite à ses Principes naturels (1722). its words, too, were taken from the psalms (psalm 69). The King James version reads: 'My throat is dried, mine eyes fail while i wait for my god.' its preceding verses thematically span the gulf between regina and signaux: 'save me, O god; for the waters are coming in my soul (...). i am come into deep waters, where the floods overflow me.' it allows us to hear signaux/regina as a diptych in which voices from the past emerge and are flooded again – a meditation on distance and drowning.